Chess Tactics in French Defense Mod is a BoardBrain Games Android Game . (com.chessking.android.learn.french) The latest official version has been installed on 10,000+ devices. On a five-point scale, the application received a rating of out of 10, a total of 165 people voted.

This course is aimed at club and intermediate players and presents the theory and playing hooks in the most sharp and deciding variations of the French Defense developing after moves 1.e4 e6. The course presents a deep theoretical and practical overview of the actual variations, featuring about 130 examples and about 330 exercises to solve. The course will be useful to all chess players employing the French Defense on either white or black sides.

The course includes a free part, in which you can test the program. Lessons offered in the free version are fully functional. They allow you to test the application in real world conditions before releasing the following topics:
1. French defense
1.1. Classical variation
1.2. Tarrasch variation
1.3. Winawer variation
1.4. Other variation
2. French defense
2.1. The Winawer variation
2.2. The classical system (3… Nf6 4. e5 Nfd7)
2.3. The Tarrasch variation (3. Nd2)
2.4. Variation 3. e5
2.5. Exemplary games
* Introducing new Animation mode! Now you can study all theory lessons in a video-style mode. Try the new Animation mode from the Contents.
* Added Help section in the Settings
* Ability to select several themes in test
* Various fixes and improvements 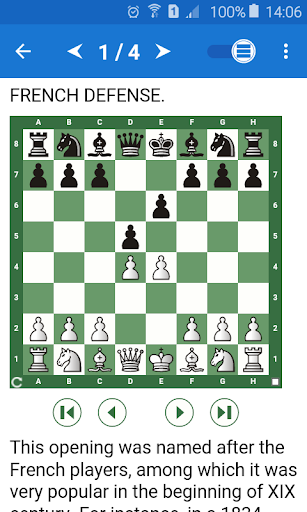 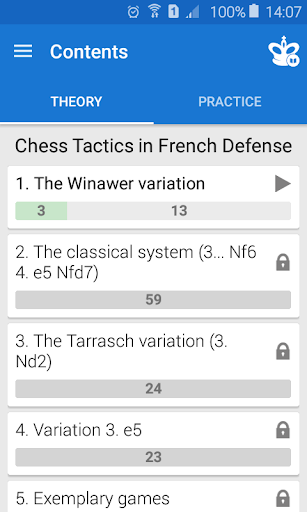